The thin film deposition techniques available in the laboratories in Aachen and Jülich cover the two main chemical methods for the growth of electroceramic thin films: the chemical solution deposition (CSD) and the metal organic chemical vapor deposition (MOCVD) method.

In the CSD process a solution containing organic compounds of the metal ions is deposited on the substrate by dip, spray or spin coating. The wet film is either firstly pyrolyzed or directly crystallized. A sequence of deposition and heat treatment procedures followed by a final post annealing step results in the crystalline film.

The CSD method is a very flexible technique of high reproducibility. With optimized process parameters, dense and homogeneous crystalline thin films of high quality have been grown. They are suitable for integration on the micron size scale as thin film capacitors in MMICs or as piezoelectric elements in MEMs.

The CSD tools installed in the cleanroom of the IWE are part of the aixACCT laboratory group. The equipment is designed for wafer sizes up to 150 mm: 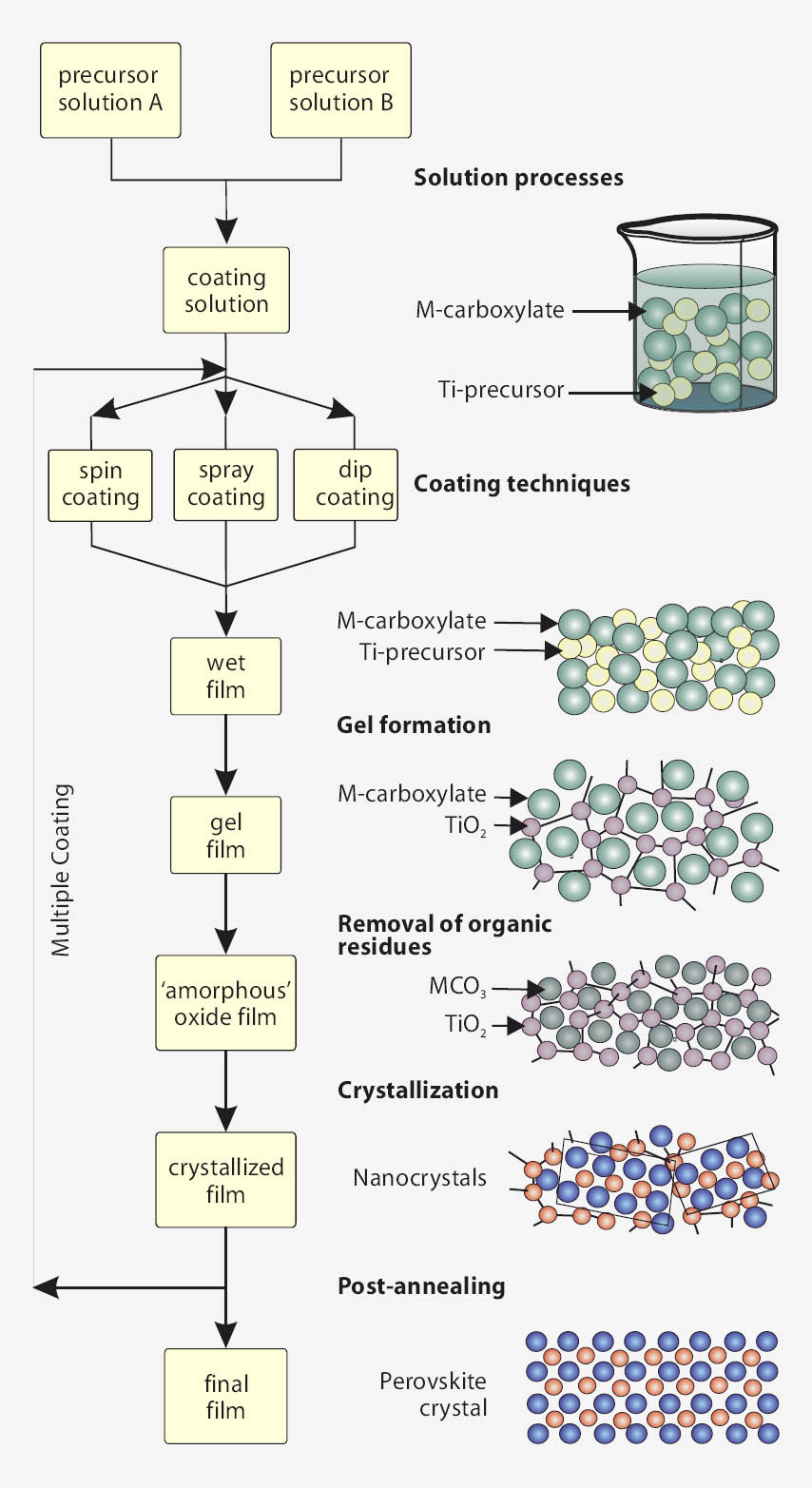 MOCVD methods are considered as primary deposition techniques for perovskite oxide films on the sub-micron size scale for high-k or ferroelectric memory devices due to their high deposition rates, amenability to large wafer size scaling, and their potential for a high degree of film thickness conformality over complex device topographies.

Two MOCVD systems are installed in the cleanroom of the EKM/IFF: 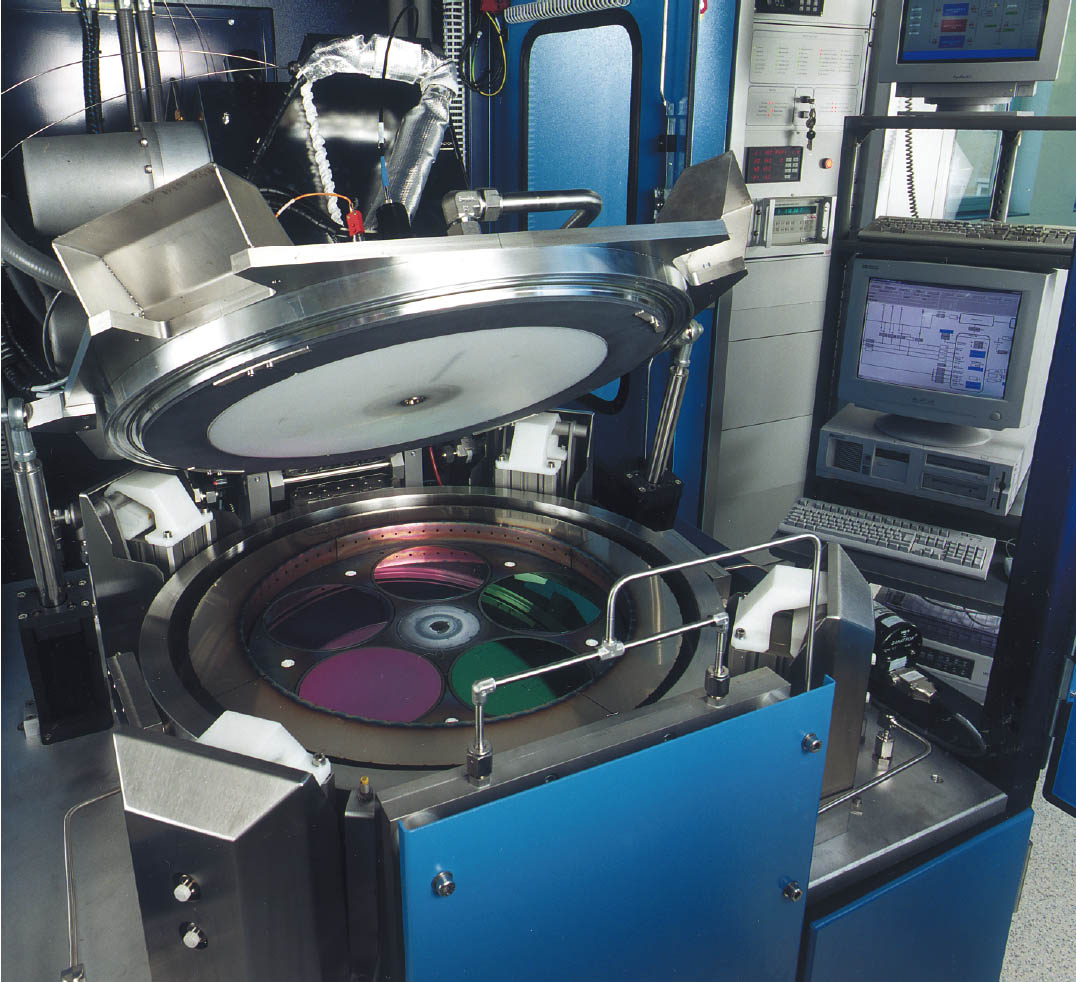 The cleanroom facilities in Aachen and Jülich provide a broad spectrum of equipment for the integration of electroceramic thin films into semiconductor devices.

The tools, which are designed for a 6" wafer line, enable the processing of structures with lateral dimensions on the micron scale. The equipment in the cleanroom in Aachen is part of the aixACCT laboratory group. The thin film deposition methods (CSD and MOCVD) are described in a separate article while the next two pages focus on the process steps relevant for integration: photolithography, metallization, thermal processing, dry etching and back-end processing techniques.

Photolithographic steps are involved in various processes: structuring of the bottom and top electrode and the ceramic thin film by means of dry etching, wet etching and lift-off techniques. 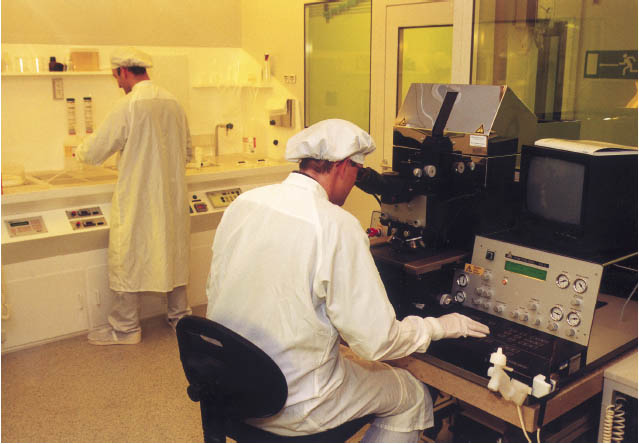 The activities performed on metallization-related topics are twofold:

First, the technological aspect of the metallization processes focuses on the preparation of reproducible, high-quality bottom electrode stacks deposited on silicon substrates.

Second, the research interests in metallization techniques cover the evaluation of new compositions for conductive, process-compatible bottom electrode stacks. Additional studies are performed on the influence of the electrode microstructure on the growth process and the morphological and electrical properties of the electrode / thin film / electrode structures. 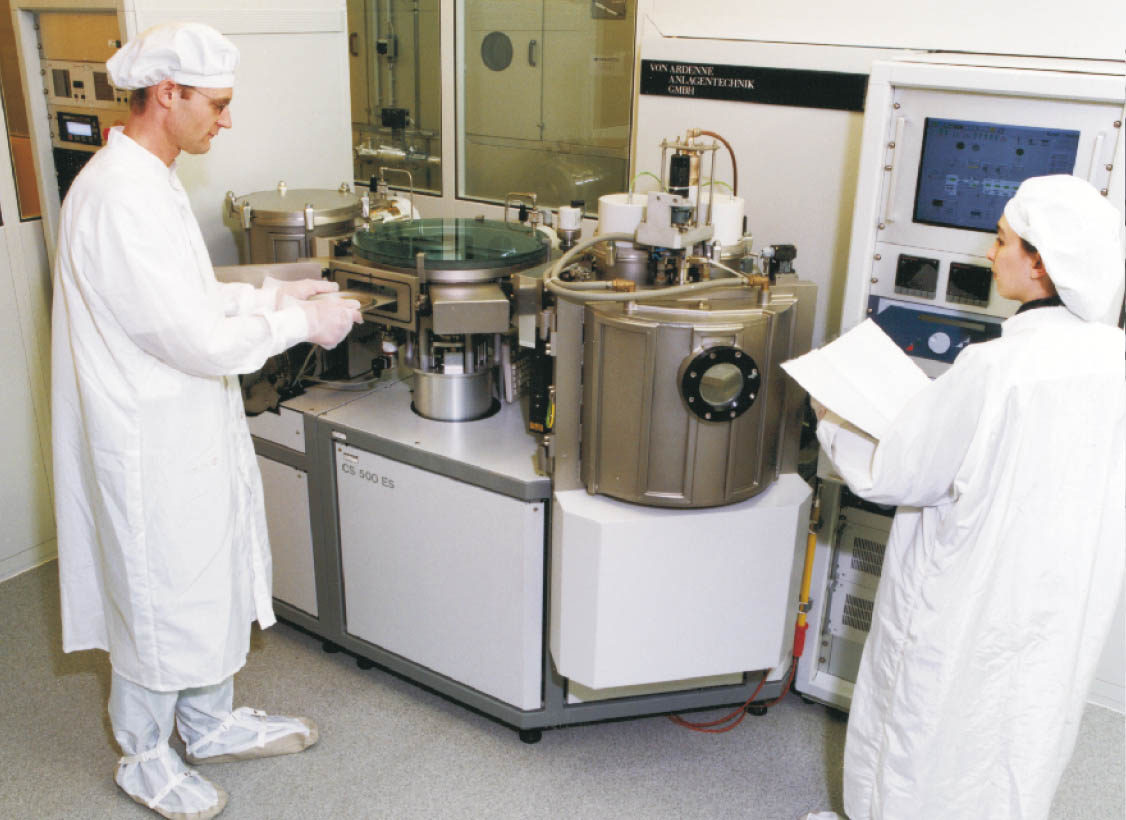 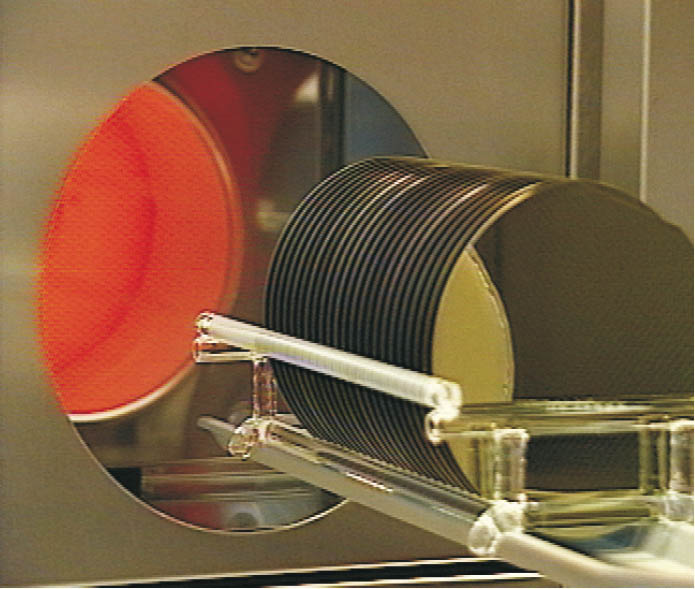 The various tasks require different thermal processing systems with respect to the heating rate and desired gas atmospheres. In order to avoid contaminations separate furnaces are available for the silicon processes and the thin film heat treatment with respect to Pb- and Bi-free and Pb- and Bi-containing compounds, respectively.

Know-how about dry etching process parameters for oxide thin films and metallization layers is mandatory for a successful realization of devices based on electro-ceramic thin films as for example integrated thin film multilayer capacitors or piezoelectric microrelays. 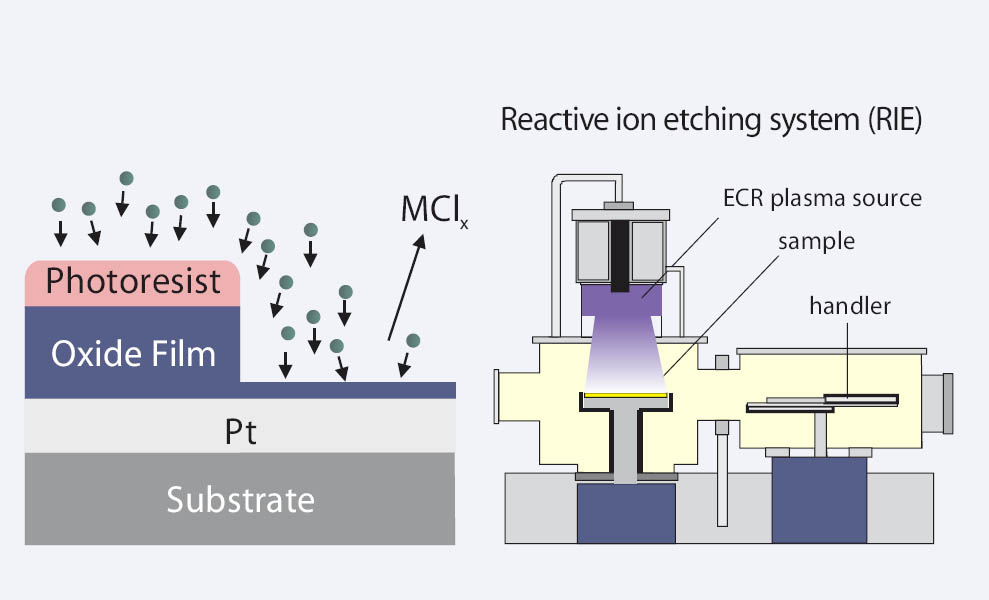 Figure 5: Schematic sketch of the RIE system and the etching process 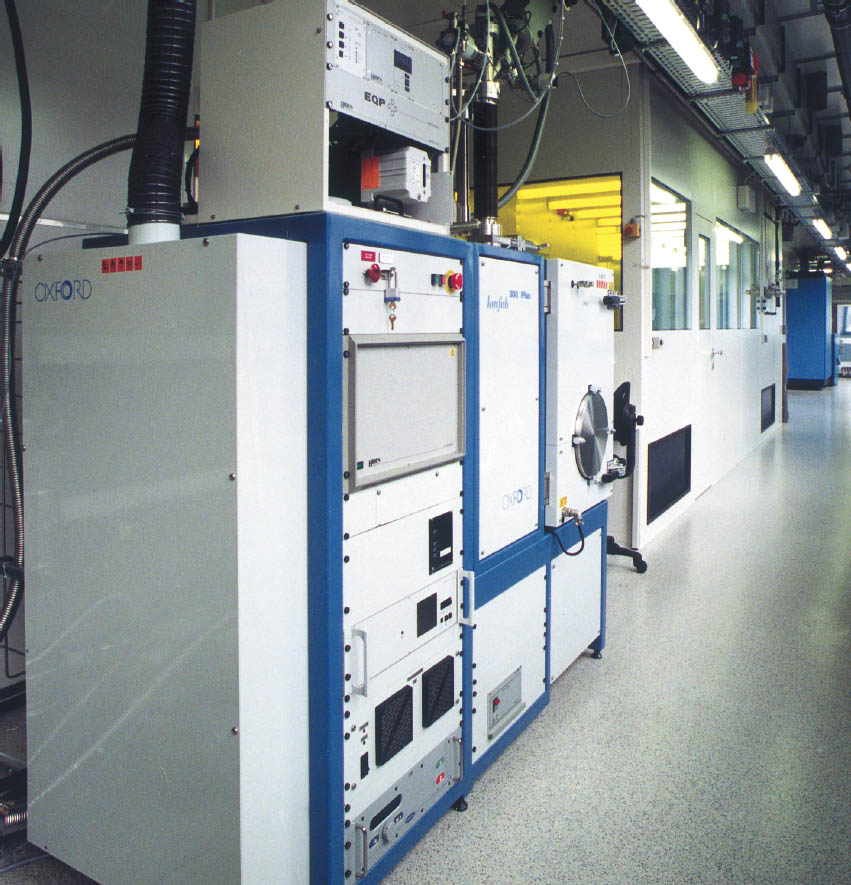 The facilities of the 6" wafer line for integration of electroceramic thin films are complemented by the standard back-end technologies wafer sawing and bonding.

An important issue of the integration of electroceramic thin films into modern micro-electronics is the patterning process. Typically, this is per-formed by means of reactive ion etching (RIE), because of its high degree of anisotropy. RIE represents the method of choice for patterning features in the submicron range com-pared to the isotropic character of wet chemical etching. 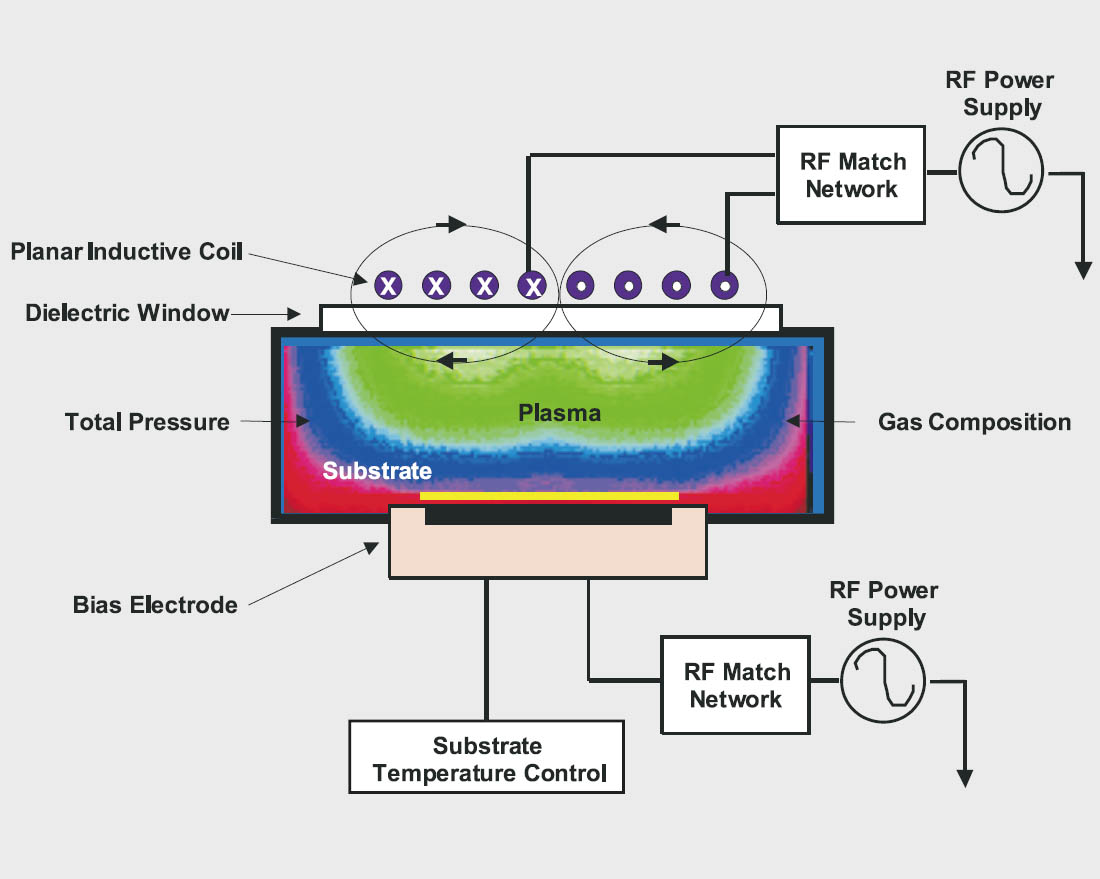 One major challenge of etch-ing BST is the formation of typically non-volatile etch products. If these products redeposit on sidewalls of the patterned masks fences are build up that have deteriorating impact on further pro-cessing. To meet the goals of (1) a high etch rate, (2) a steep sidewall slope and (3) a clean wafer surface (without residues and fences), a suitable process has to operate at low pressures, with a high plasma density and ion energy. Reactive gas addition is mandatory. An optimized etch process was established with an etch rate of 70 nm/min and a profile slope of about 80°. 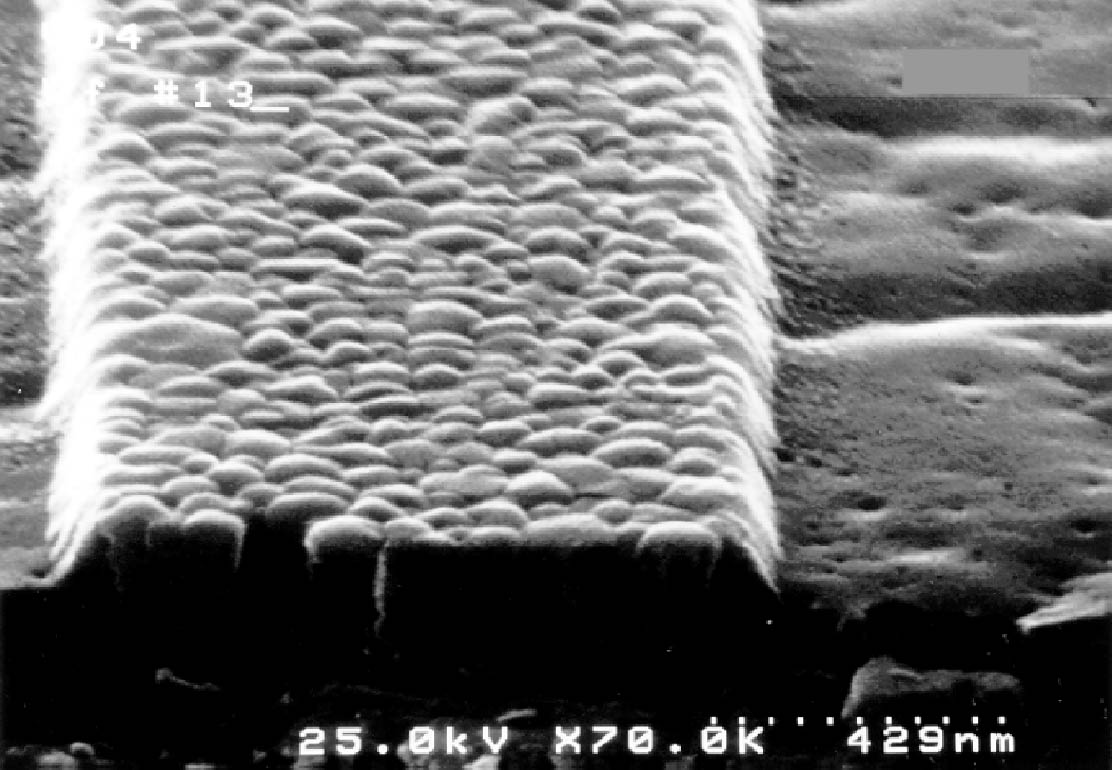