Photoelectrocatalytic generation of hydrogen (H2) from water by sunlight can be efficently conducted through nanostructured oxide electrodes. In addition, harvesting energy from ambient sources is an efficient way to supply energy for independent microdevices.

Rechargeable Li-ion batteries have developed into an area of intensive research due to numerous fields of applications in modern multimedia devices such as digital cameras, laptop computers, cellular phones etc. The recent price increase for fossil energy and the environmental issues associated with classical energy sources give a further stimulus to develop rechargeable Li-ion batteries in order to generate an alternative power source for individual mobility. Recently integrated rechargeable thin film Li-ion batteries were generally proposed as a new concept for the on-chip power supply in miniaturized electronic devices [1]. Thus they can be also used as buffers for energy harvesting systems. Typically these micro batteries consist of cathodes such as LiCoO2, LiNiO2, LiMn2O4, or V2O5, a solid electrolyte like LIPON, and an anode made e.g. from a metallic lithium film or a lithium ion intercalation compound. Hitherto these films are mainly deposited by physical vapor deposition methods like, sputtering or vacuum evaporation [2]. These techniques, however, have a number of disadvantages such as difficulty to control the stoichiometry, and relatively high cost. Hence chemical solution deposition (CSD) offers an interesting alternative approach due its inherent large flexibility concerning composition and deposition method, as well as comparatively low cost for equipment and processing [3]. Nevertheless reports on CSD derived cathode and anode thin films are scanty.

This project is aimed to an integrated all-solid-state rechargeable Li-ion battery prepared by sequential CSD processes. Figure 1 shows the schematic of such a thin film battery.. 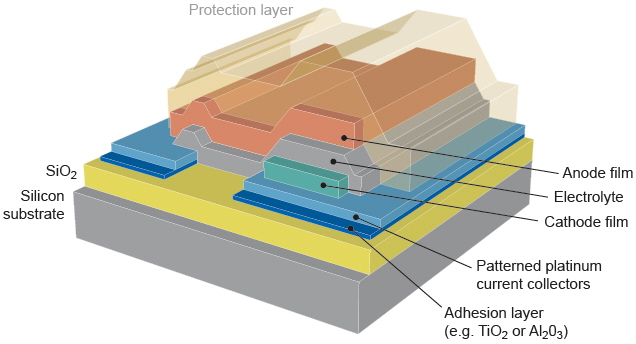 Figure 1: Thin film rechargeable Li-ion battery stack integrated on a silicon wafer. It consists of the cathode, a solid state electrolyte, and an anode. The anode and cathode, respectively, are contacted by the patterned platinum bottom electrodes in this example.

In order to optimize the performance several material combinations will be investigated. The first steps are devoted to the development of a suitable cathode material. In these experiments Li and Co carboxylate based precursor solutions have been prepared, deposited on platinized silicon wafers and crystallized. Figure 2 shows the field emission scanning electron microscope (FESEM) image of a CSD derived LiCoO2 thin film as one example. The film posses a dense and plate like columnar microstructure. 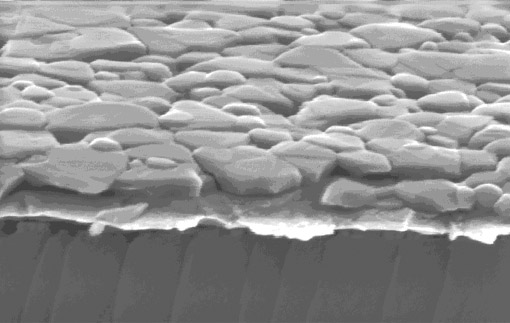 Recent advances in low power electronics promoted the development of numerous energy harvesting principles for the powering of self-sufficient remote sensor networks. In this respect, converting ambient vibration energy into electrical energy by means of piezoelectric transducers enables a considerably higher energy density than rival approaches. The potential applications for self-powered devices are innumerable including continuous monitoring of machines or buildings, remote area control and the reduction of maintenance costs. However, in order to scavenge ample amounts of kinetic energy sophisticated microsystem design concepts have to be developed.

The effects of microsystem design and optimization on the amount of harvestable energy are investigated using simulation approaches and the fabrication of respective prototypes. Methods used comprise finite element simulations, network analysis software and the usage of standard thin film deposition and fabrication techniques (CSD, Sputter-Deposition, Lithography, Reactive-Ion Etching etc.). Further mayor issues are the choice and optimization of the active element, the piezoelectric transducer. Thorough material optimization and adaptation is believed to further increase the potential power gain.

As the amount of harvestable energy is expected to be on the order of (sub-)µ-Watts, extensive device simulation and optimization is required. A reasonable power output is only feasible while maintaining operation in mechanical resonance. Therefore, the resonance frequencies of the device have to be matched to ambient vibrations which occur mainly at resonance levels of a few hundred hertz. Though, designing microsystems to resonate in this frequency range proves challenging. Referring to this, designs such as spiral-beams are able to increase the effective length leading to a huge decrease in resonance frequency. However, the compensation of initial stresses in spiral-shaped multilayer beams is a complicated task. 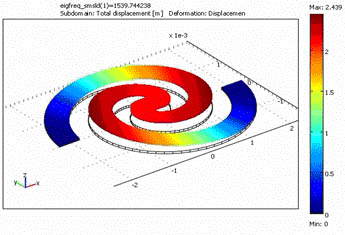 In recent years, environmental concerns regarding the potential toxicity of lead in microelectronic devices entailed new European Community directives. One group of applications that is especially affected by this restriction of usage concerns all kinds of piezoelectric devices which are nowadays made up mainly of Lead-Zirconate-Titanate (PZT). A promising candidate for the replacement of PZT in piezoelectric devices has been located in the Potassium-Sodium-Niobate (KNN) material system and its various doped forms. However, since severe difficulties emerged in the processing of complex niobium oxides utmost importance is placed upon the elaboration of functional deposition processes.

The film formation process in CSD-derived KNN thin films deposited on platinum-coated silicon wafers is studied. Optimal growth conditions and chemical synthesis routes are investigated through a systematic variation of precursor chemistry and deposition parameters. The structure and morphology of the films are characterized using XRD-, SEM-, TEM- and other methods of surface and bulk analysis. Further characterization focuses on the electrical and electromechanical quality of the deposited films.

Films of Sodium-Niobate, Potassium-Niobate and Potassium-Sodium-Niobate have been synthesized using different chemical synthesis routes and deposition parameters. It has been shown that the reactivity of the alkaline compound and the chemical synthesis route are of special importance for the resulting properties of the film (particularly the homogeneity of the microstructure and the electrical properties). 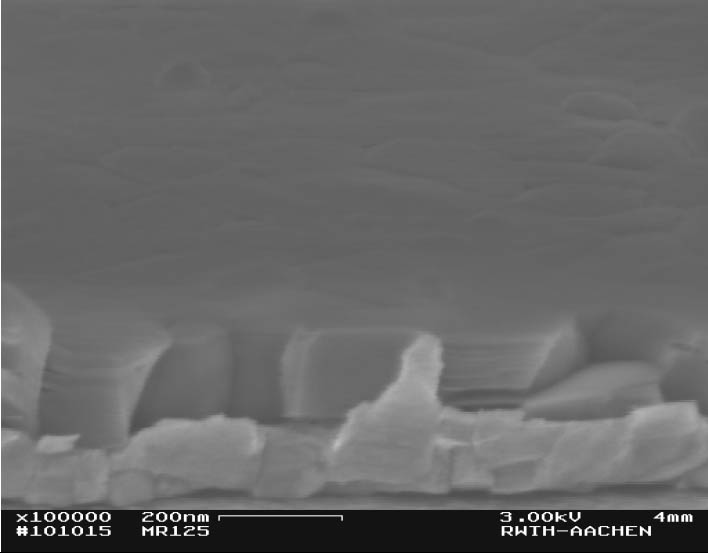 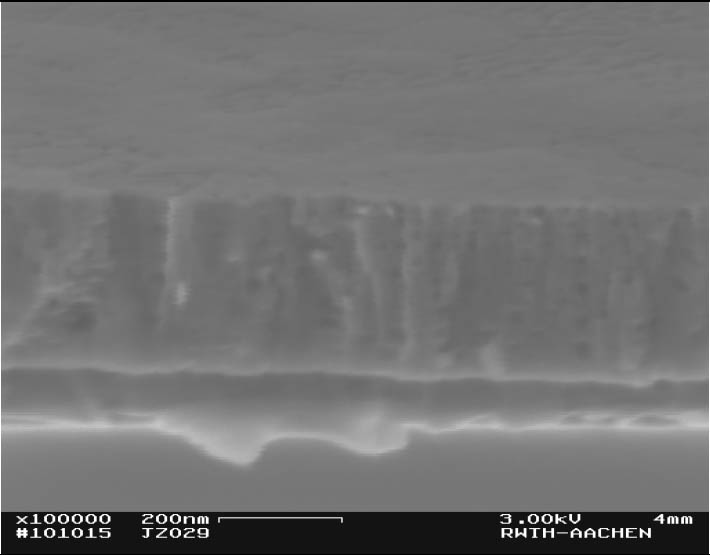